FOREWORD to the Journey 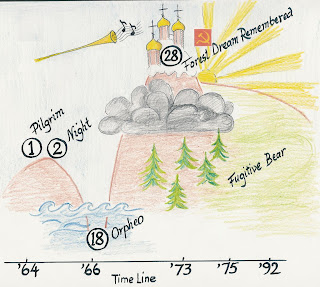 We must tell our stories to each other, however they are lived. Mine is dedicated to my grandchildren and great grandchildren, as well as to their parents, in the hope that it can be told as accurately and responsibly as memory, records and awareness will allow.

This "Odyssey" was inspired by the Russian Orthodox way of confession, especially how Hiermonk Arseny is described in the book Father Arseny, Priest and Prisoner and how he conducted his life in the Soviet gulags. It is also due to having been befriended by local priest Fr. John Hennies of St. Dimitri of Rostov mission parish of the Orthodox Church in America (OCA) here in Los Alamos, New Mexico.

My hope is that this blog, now in mostly skeletal form, will flesh out into something alive and meaningful enough to evoke dialogue with family, friends and strangers. To this end I hope that those who know me will comment as these blog bones and threads jog memories, whether with pain, pleasure or amusement.

In that vein I invite those who have known me in earlier periods, especially where their own experience was NOT positive, to comment such that we can together transcend, include and transform troubled memories into something good, true and beautiful. I am conflicted about always using actual names, even though dates and places are as accurate as I can remember and document. In order to protect certain people, a pseudonym may occasionally be more appropriate, but this choice can always be revisited.

**Note: this initial blog post has been set to appear at the top of the blog series. From then on the most recent posts will appear in reverse chronological order.
Posted by Eugene at 00:01 No comments: