Leo Tolstoy in his last years 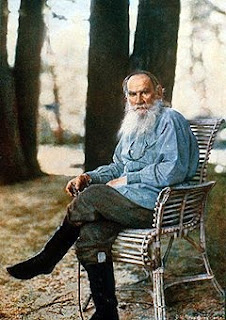 This past week while browsing in the local Film Festival video store and coffee shop, I came across an important film released last year in 2009 that I had not even heard of. How could I have missed it, when none other than luminaries Helen Mirren and Christopher Plummer star in it!? Plummer plays the role of Leo Tolstoy in his last years in the early 1900s and Mirren plays Tolstoy's jealous and troubled wife Sofia.

The reason why this film is important to me in this Orthodox blog series is that it was to the Tolstoy Foundation that my father applied in the 1930s for help in finding his relatives in Ukraine, after coming to this country in 1922 as a war refugee from the Russian Revolution. Somewhere in our family archives, either in the records kept by my brother Virgil or my daughter Katya, there should be correspondence between Dad and this foundation. As I mentioned elsewhere about Dad's concern, he eventually realized that his inquiry may have compromised the safety of his relatives during those terrible years and worried about this misstep for decades. (See here for Dad's and my last conversation about this concern.)

This then brings up the question of what all this has to do with the Orthodox Church and my part in it. For the same reasons that Tolstoy rejected Russian Orthodoxy back in the late 1800s, but without the profound understanding of Tolstoy, Dad rejected it in his teenage years during and after the Russian Revolution. The Russian Orthodox Church was corrupt and oppressive in those days and thoughtful Russians like Tolstoy and his followers were in reaction to it, convinced that the teachings of Jesus had been co-opted by the institution. This is, of course, an old story, which might be applied to any institutionalized "Christian" church these days, whatever legitimacy they claim by tradition or revelation.

As far as the world-wide Orthodox institutional church is concerned these days, there continues to be a hierarchical struggle for power, as evidenced by the recent conference of bishops in New York. Fortunately there are now a few courageous voices who are well enough positioned to challenge arbitrary or ambitious ecclesiastical decisions. For example, when Metropolitan Jonah (of the Orthodox Church in America) was specifically NOT invited to participate in this conclave of Orthodox bishops by the Constantinople Patriarch, who claims traditional ecumenical authority for all Orthodoxy, the bishop from Boston, who had organizational responsibilities for the conference, specifically DID invite Jonah to attend in his rank as a fellow bishop, but to take his seat at the lowest ecclesiastical rung. This Jonah did without resistance, complaint or resentment, which set an example equal to that taught by Jesus and which won the approval of the rest of those gathered. Although this was a "small step for man", it was a HUGE step for the international institutional church of any denomination!

I wonder what Tolstoy, or my father for that matter, would have thought about this remarkable development.

There are other issues in the institutional church, especially the OCA, one of which involves the laity who are often ignored, dismissed or marginalized by ecclesiastics these days. I look forward to the day when the OCA installs an office to respond to any parishioner who petitions the hierarchy for any reason. At present, such petitions are more often ignored. An exception to this is the Q&A section on the OCA website, which is generally responsive and is a good precedent.
.
Posted by Eugene at 06:30