Plowshares to Swords and back to Plowshares??? 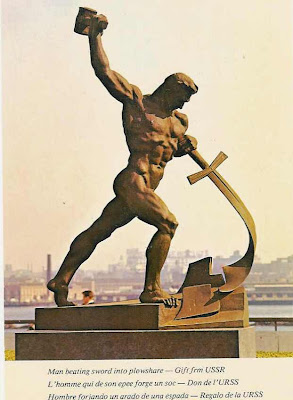 On Sunday, 28 February 2010, my wife Birgitta forwarded a surprising contradiction to a scripture that has been at the center of my life's work since graduate school in 1961.

The above image of the smith beating his sword into a plowshare is a Russian artist's conception of Isaiah 2:4, which scriptural reference ["Исa 2:4"] is carved into the base of the Moscow version located in the Tretyakow Gallery near the Kremlin, where I first saw it in September 1973. The UN version, which I hadn't known existed until years later, is identical to the Moscow version except that this scriptural reference does NOT appear on its base in NYC. (I have personally inspected both these figures and their bases for this.) Here is the complete verse in English:

And he shall judge among the nations, and shall rebuke many people: and they shall beat their swords into plowshares, and their spears into pruninghooks: nation shall not lift up sword against nation, neither shall they learn war any more.

I had always marveled how the sculptor had managed to express himself right under the atheist noses in the militant Soviet Kremlin. But now my wife sends me a quote from Joel, an earlier Hebrew prophet, commanding Israel to do the very opposite. It's confusing. Birgitta reminds me that Joel is talking about spiritual reality and not physical reality. But that doesn't console me. I'm not convinced that most modern, biblically motivated readers of these scriptures won't take them literally as metaphors for endorsing modern warfare.

Birgitta wrote:
Here’s a thoughtful way to consider this scripture that you love.

"Beat your plowshares into swords and your pruning hooks into spears." - Joel 3:10a

In this third chapter of Joel, we hear the prophet describe a time yet to come. It will be a time of great harvest on the earth, and this verse describes the catalyst. A plowshare is an agricultural instrument used to till the soil. At this point in history, it was a tool that spoke of one's vocation. However, the prophet was speaking of a time yet to come. The prophet described the plowshare as an instrument that will be turned into a sword. The sword is often used in the Bible to describe God's Word. The only way a plowshare can be turned into a sword is for it to go through extreme heat, and then the blacksmith must beat that plowshare into shape. Heat and punishment of the metal turns that plowshare into an instrument of battle. God must do this in each of our lives in order for us to be useable as a worthy sword. We are all in a battle - a spiritual battle. Paul describes our battle as one against the principalities of the unseen world. I believe God is going to raise up many in the workplace to use their plowshare as a weapon of righteousness in these last days. That weapon won't be used for destruction, but as a weapon of love. That weapon of love will yield a great harvest in our lifetime. But this is only part of the story.

God is also going to turn our pruning hooks into spears. A pruning hook is used in two ways. First, it is used to prune a tree for greater growth and productivity. It is also used to cut the fruit from taller trees in which one cannot reach the fruit. This fruit from our vocation is going to be cast forth like a spear, but even more as seed planted to bring the harvest of which Joel speaks. Fruit from our work life is often the financial rewards generated. God wants to use our finances and everything else for His purposes. We must use our vocations and the fruit that comes from them as seed to bring the great harvest that God is planning.

How are you using your plowshare and your pruning hook for God's glory today? Ask God to show you how He wants to use your skills, resources, and relationships to prepare for the great harvest He has planned.