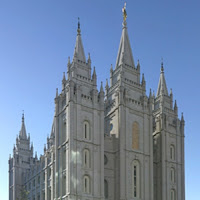 When I returned to work on Monday, September 2, 1965, having been released from the psychiatric hospital the day before, my employers we surprised and embarrassed. Bets had been taken that I'd be put away for a long time. I was asked to resign. "If you will release any patent rights to ideas I might come up with that can be traced my time at General Atomic", I said, I will resign. That was the deal we signed and I was now out of a job. A generous severance pay allowed me time to search for support to build a laboratory.

This development greatly distressed wife Betty and she demanded a divorce. Although this surprised me, I was too focused on recent events to take her demand seriously. "Of all times to pull the rug out", I thought and decided to contact former professors and church leaders in Salt Lake City for professional and spiritual help. My primary objective was to reach President David O. McKay regarding the July 25 revelation as well as the aborted idea I had earlier written to him about. The secondary objective was to find support for building a laboratory.

I purchased a motorcycle and took off for Utah.

On the way I wrote Posterity while reflecting on Betty's fearful request.

Thy fate rests
In her heart:
Sealed—or doomed.
Like whim almost.

Profound beginnings
Still unknown
Until so late—
How precious time!

The choice remains
While Future waits
To tell this rising peak
Its height.


[9 Feb 13 Note. Adding commentary to Posterity as requested by and for son Nick]

Posterity was written to your mother, Nick. I was in on the way to and having all kinds of trouble with a new motorcycle that I’d bought for the trip, just after being released from the hospital and subsequently resigning from General Atomic.


The poem reflects my uncertainty about her commitment. Betty vacillated during the days when I was in the hospital. It was disconcerting. I wanted her to make a clear choice about her life with me, but she seemed unable to makeup her mind. So, I pushed her with: "You're either for or against me."  She said she certainly wasn't for me.

I’m aghast when I review my pocket journals for that time period. What a chauvinist I had become! So full of myself and believing that once I made it to , the Brethren would recognize me with open arms. From today’s perspective I wonder how your mother could have stayed with me as long as she did. Poor woman. All she ever wanted was a stable, reliable husband like her blue-collar father. And what did she get? An inflated, moody, singing scientist-engineer-mystic!


It became clear to Betty after I left the hospital that I wasn't getting any better as far as she was concerned. Besides, Kaye and other women were coming into my life [thus into hers] and, albeit they deferred to her, she could not cope. She had obviously forgotten an incident when we lived in in the summer of 1959. At that time she expressed regret that the days of plural marriage had ended, that she felt inadequate to serve my needs, and that I needed other women. Her expression flabbergasted me. At the same time it moved me deeply. I knew she was unhappy in the marriage, but I thought her expression was one of extra-ordinary unselfishness and care in the face of her unhappiness. I remember that my own feelings for her became more affectionate. On reflection I wondered if she was also saying that she needed someone else, herself. I remember beginning to look for a more down-to-earth type fellow for her to relate to. I seem to remember that she and I talked about this then.


Just after I was released from the psycho ward, Betty asked for divorce for the first time. It was hardly good timing. I needed her more than ever and didn't believe she meant it. I thought she was playing a manipulative game. So, I left on a trip for to gain Church and professional support. I was in for a rude surprise.


Between Las Vegas and Provo I encountered an historic snow storm for which I was ill prepared. I had on only summer clothing and soon began to freeze. By the time I reached Provo I needed to gas up, but could not get off the bike. I had to lean against the pump while stuck to the seat in order to fill up. But now I was too cold, tired and hungry to continue. Who could I ask for help? The image of Briant Jacobs, my old English professor at BYU, came to mind. He was in the phone book and I drove to his door. He opened the door and remembered me. Seeing my condition he and his wife warmed, fed and showed me to a room to sleep in. After hearing some of my ramblings, he invited some of his university colleagues to visit and talk. One or two were professors of physics.

The next day I arrived in Salt Lake City and became the house guest of Morris A. Kjar, to whom I'd been a counselor when he was the mission president for the University of Utah stake. When I explained what I'd been going through the past few months (he'd been on the July crisis call list), he decided to help me make contacts with several general authorities, including Joseph Fielding Smith and Harold B. Lee. President McKay was not available at the time both for health reasons and scheduling. The October General Conference was looming.
Posted by Eugene at 21:14