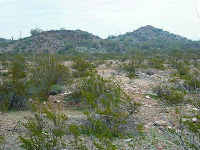 It is early 1953 near Phoenix, Arizona, where I grew up. I am 19 years old and have just quit Brigham Young University in Provo, Utah after having been a student for one year. The Korean War is raging and Stalin is still alive. I had quit school in order to marry Vonda, my high school sweetheart, even though both sets of parents did not approve. Nevertheless, Vonda and I were headstrong and did what we pleased, despite being devout Mormons from earliest childhood.

One Sunday in January, while riding and testing my new motorcycle on a gravel road in the Arizona desert, I am involved in a terrible accident. Usually in that vast cactus country one rarely sees another vehicle. But I am suddenly hit from behind by a pick-up truck driven by three teenagers, who were not expecting another vehicle, let alone a motorcycle. I am on a curve and have had to slow down to keep control. The truck cannot stop in time even though the brakes have been slammed. It is like being atop a road full of tiny ball bearings. Over the embankment we go into the gully below, the truck pushing me in front all the way down. (The front bumper has caught under my buddy seat; otherwise I would have been hamburger.) Nevertheless, when the dust settles, I find myself underneath the truck with my mangled machine. The kids fear they have killed me, but manage to get me out from under the truck along with my wrecked bike and transport me to an emergency facility. My legs, although not broken as had been suspected, are badly damaged and so swollen that it takes weeks before I am able to walk again with the aid of crutches.

During this recovery period I am notified to report for a physical examination to determine my eligibility for military duty. This is because I am no longer a university student and thus no longer deferred. So, I report on crutches, confident of being physically unfit. A blessing in disguise, I think, as I feel assured my girl and I can proceed as planned. Those plans are soon to be thwarted.

On Friday, April 17, 1953, I decide to visit the draft board to make sure there are no surprises to the marriage plans. To my dismay I discover my draft papers on top of a pile of notices on the sergeant’s desk ready to call me and others into active duty. The medical examiners had written “Evidences of recently sprained ankle” on my report!

I am dumbfounded! This is the worst news possible. Everything has suddenly changed and I begin to think, “My God, I do not want to go to Korea to get my ass shot off. Is there some school available where I can learn something?” Letting loose my wildest imagination, I think: I’d learn my father’s mother tongue! and hear myself blurting out loud “Is there a possibility that I can learn Russian?” knowing, of course, that this was fantasy.

Startled, the sergeant looks at me and exclaims, “Wow! Just today we received a letter from Washington for a quota of one for the state of Arizona for the month of April for the Army Language School to study Russian! The job is yours if you can qualify.”

Having taken one quarter of Russian at BYU in 1952, it is enough. “Where do I sign?” I shout and an instant later I become a soldier. That was Friday. The following Monday, after saying goodbye to Vonda and family, I am on the way to California and the rest is history. I do not see Vonda again for over 20 years.

23 Feb 14:
This morning on Scout Sunday at Trinity on the Hill Episcopal Church in Los Alamos, the priest in charge began his sermon with the Scout Motto: "Be Prepared". I immediately flashed on this experience with a new insight. See here for that story.
Posted by Eugene at 01:15