"Who sings prays twice", Fr. John once told me when I first confessed two years ago about having trouble praying aloud in public after we first met. And so my appreciation for the Divine Liturgy began to grow. I love singing the liturgical hymns and other songs with others in the simple a Capella harmonies of the Russian Orthodox tradition.

But because of our on-going struggle to understand the frequent confusion and disharmony during the singing at our parish, Fr. John suggested, during a recent regular weekly conversation, that our parish council bring in someone knowledgeable for a musical retreat. It was an inspired moment, but it was followed by more moments of powerful fear!--Fr. John had intuitively seen our still hidden "elephant in the room". Now highly motivated, we both began an immediate search for whom to invite. A few days later we independently came up with the same name! My assignment was to make the contact and work out the details with retired professor of music David Drillock from St. Vladimir Seminary, who is the official OCA liturgical resource. 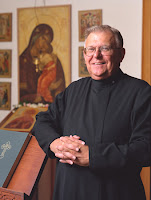 I made the contact this past week and the generosity and cooperation of this grand old gentlemen has moved me deeply. We have now had three lengthy, clarifying conversations to prepare our parish for a musical retreat sometime this summer. Our last conversation was a conference call last Friday night (May 15--my Ukrainian father's birth date!), which included Barbara, a life-long Russian Orthodox member, and my wife Birgitta, a retired professional opera singer with substantial experience with the Lutheran liturgical music in Sweden. I could not have asked for more competent, cooperative and motivated participants in this discussion.

Under Professor Drillock's guidance, we now have achieved a clear strategy on how to develop the music and methods tailored to our parish and to prepare for an expanded musical retreat.

It felt miraculous! The liturgical music sounded beautiful this morning and I felt joy in singing with all the parishioners. Our feared elephant was nowhere in evidence, which Fr. John referred to in his sermon today, also mentioning another parishioner's metaphor of a feared 800 pound gorilla!

After the service, Elizabeth, birth mother and sustainer of the parish (who gave it its name almost two decades ago), presented a condensed report of her sources for the parish liturgical music. It was helpful and will be folded into the council's on-going musical retreat plans. It's wonderful what happens when we invite, hear and heed the promptings and influence of the Holy Spirit, which is always in our midst.
Posted by Eugene at 07:19