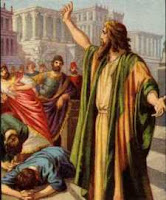 When pressed for proof in Galilee
He spoke of Jonah's journey.
Amid the ruins of Zerahemla
He cited a Lamanite's cry.
What will He say of Los Alamos?
...
Of Los Alamos He will laugh
To say their priest is rich
No matter what he wears
And better than the Golden Calf
Are his friendships whom he serves.

And as its Nazarene pastor strives
To wake his struggling flock
Many other Watchmen sleep...
What will he say of America? 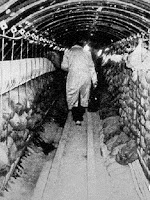 Yesterday in our Wednesday morning conversation, Fr. John expressed something that moved me deeply, having to do with singing in our parish. It evoked the memory of a wonderful Russian Orthodox man, Maestro Jakob Ivanovich Petrov, my first voice teacher, whom I will always revere for what he did for me in 1953. Surely it was he who first evoked the love of beautiful sounds from a classical Russian artist. I was a 19 year old soldier at the Army Language School in Monterey, California, training to become a Russian interpreter. I was also a member of the school Russian choir, mentioned in an earlier post in this blog.

During a period of low morale and unbelief (probably from learning that my high school sweetheart had married someone else) I found myself praying: "Oh God, if there is a God, I want to sing." While I was at it I found myself making a deal with God if he was listening: "I don't want just an ordinary voice, but one that moves people." OK, so that's what I wanted, but what was I willing to give in return? "If you give me such a voice", I offered, "I will not use it for personal financial gain, but for your purposes..." If I felt foolish after voicing such a prayer, I don't remember. But I think I felt better.

Soon thereafter, in a voice lesson warm up with Jakob Ivanovich, I remember singing a particular note in my middle register differently. It was a tone he had been waiting to hear, but he said nothing to distract me. Instead, he stopped the exersize to ask me to sing that note again the same way. I did. Then again. And again. Yet again. This went on for what seemed an insufferably long time and I was getting bored. But Petrov would not let me stop until he was confident that that particular tone was mine. Then I remember him relaxing and quietly saying (in Russian--he spoke no English) "And now we begin!" I had produced my first clear bel canto tone. Then he skillfully helped me anchor that one beautiful tone in my soul until I could produce it at will. From there he helped me expand that first tone into a second tone a note above, then a third tone a note below, of equal quality. His exersizes soon helped me stretch my entire singing range into more than two and a half octaves of similar quality. Soon I was singing as soloist with the choir in concerts all around the Monterey and San Francisco Bay areas while still at the ALS between 1953-1955.

After the Army I studied with Petrov again in San Francisco while an undergraduate engineering student at Berkeley. At the concert posted above in January 1960 in San Francisco, which included me and many of his past, now professional students, I remember telling Maestro Petrov that one day I would return the gift that he had helped me develop to his homeland. Thereafter, I looked for every opportunity I could find to sing to Russians, eventually getting to do so in Moscow, Kanev, Kiev, Riga and elsewhere.

This past Monday I received a belated Christmas present from my son Steve, who lives near Washington, D.C. When I opened it and saw the inscription on the DVD it contained I was speechless. "Could this mean what I think it might mean?" I asked myself silently. I called Steve to ask him how and why he had sent it.

It turns out that Steve had attended a Sunstone Symposium East session recently, where Darius Gray and Margaret Blair Young were presenters. They screened this film for the audience, which was based on their published trilogy of books called Standing on the Promises, the story of the black Mormon experience.

After the presentation Steve introduced himself and learned that Darius and Margaret were familiar with our family name. Steve then asked if they knew his father's experience on 25 July 1965, which happened the very night his wife Nicole was born. They did not. So, Steve told them. Hence the inscription. "To Eugene: Thank you for preparing the way. What you did mattered." THAT had been the hill his father chose to die on. [See: "Carmel Beach Challenge", January 1965]

It is refreshing to see these words representing the first published statements by our new Metropolitan Jonah. Although his paper with that title was written almost a decade earlier when he was a hiermonk in a California monastery, these two words symbolize to me the clarity of his vision for the Church.
Posted by Eugene at 06:43 3 comments: