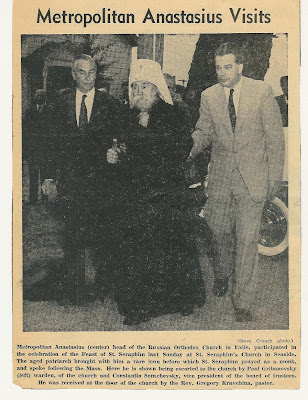 In summer 1954 the Army Language School (ALS) Russian Choir sang for legendary Metropolitan Anastassy at the end of a banquet in his honor. The choir ended its program with "God is with us", in which I sang the cantor chant. At the end of the program the Metropolitan stood up and came to the stage, called me out of the choir, took my hands in his, and weeping unashamedly told me about a mystical experience he had had while I was singing. I did not understand the significance of this at the moment, but soon afterwards my teachers explained that he had felt mystically transported back to pre-Revolutionary Moscow to the great cathedral where he had heard a famous cantor sing that very chant.

The significance of this event became clear to me only recently (December 2006) when a friend emailed me a file of Russian Orthodox music which contained this same chant "God is with us". Only then did I recall the event and register the significance of the Metropolitan's long ago tears. My friend's emailed files of great Russian Orthodox choral music is what launched my present Orthodox Odyssey.
.
Posted by Eugene at 08:15