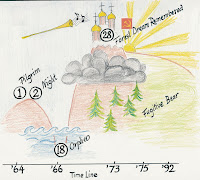 In May 1967 I awoke from an astounding dream, ears still ringing from hearing two magnificent trumpet tones.

I am standing alone in a forest (like Big Sur in California). Soon an aristocratic older woman comes into view and speaks to me in English with a Slavic accent, "Ah, I thought I recognized you", she said. "I heard you sing long ago and was most impressed. And I hope I hear you sing again." A little later several older men with noble bearing come to me one by one to shake my hand and introduce themselves. I remain silent, not knowing what to say. Then I hear whispers from a crowd that has gathered in the meantime, identifying each man, "Oh, that's ..., and that's ... and that's the great Toynbee!"

Soon I am again alone and hear the two trumpet sounds in a descending fourth (as in the song "Born Free"). They begin pianissimo then gradually crescendo into commanding echoes from horizon to horizon as I awake.


The dream was so compelling that I wondered if it were an apocalyptic call and if the woman were Mother Russia. It came to me at a time where I had begun to loose my sense of direction and it gave me renewed hope. This was especially so when I learned several months later of Arnold Toynbee's appearance at the University of Utah (my alma mater) the following month to give the commencement address to the graduating class entitled "Three Generations in a Crisis". He also participated in a University sponsored Creativity Workshop and delivered a paper entitled "The Creative Process in History". These two papers changed my life and gave me new, confident direction.

The beauty of the dream trumpet tones led me to invent the "Solar-spectral Scale", which was eventually used to commission composer Eric Funk to develop an original piece called "Stellar Evolution" in summer 1972 as background music for The Immanuel Velikovsky Symposium at Lewis and Clark College. The composition was based on astronomers' star charts to musically describe the birth, life and death of a star.
Posted by Eugene at 17:15