As I was actively planning a major career move to join Professor J.B. Rhine's Foundation for Research on the Nature of Man in early 1965, I read a passage in the Book of Mormon that moved me deeply. Never had I been so affected by anything scriptural.

For the Lord hath called thee as a woman forsaken and grieved in spirit, and a wife of youth, when thou wast refused, saith thy God. (3 Nephi 22:6)

[Note: this Book of Mormon verse is identical to Isaiah 54:6 KJV.]

I could not account for such deep feelings until, upon reflection, I recalled a dream from two or three weeks earlier:

I am a beautiful woman with bad reputation. Always being taken advantage of (no specific instance that I can remember) but am a kind of fugitive. Some wives are jealous; some hypocrite husbands would have me put away. I run. Hide. Sleep under a house. They pass me by.

I return to my locker (in the temple) to get my things. Can’t find my briefcase. A conference of seminary administrators is meeting. They look wholesome. They do not notice me though my locker is nearby. I am in Levis and T-shirt, mussed from having struggled the day before and slept under the house. A woman friend with locker next to mine tells me: “[so and so] is not going to say anything when you tell your side of the story. She’s just going to remain silent and pretend she doesn't know what you’re talking about.” (23 December 1964)


The Book of Mormon passage seemed linked to this dream, which I accepted, but did not understand. In outer life I was an active Mormon with wife and 5 children plus a spotless professional and personal reputation. From today's perspective this dream seems to foretell a major turning point in my inner spiritual journey that would soon become powerfully manifest in my outer life.

The nature of this turning point became even clearer 42 years later when, in September 2006, I received an email from Saijin, a friend and former Mormon, who had once worked for me in California. We had had no contact since 1992, when I moved to New Mexico. At the time of her email and independent of the purpose of her contacting me, I was still mulling over the implications of this particular dream. Saijin found me through my family website (now off-line) to ask permission to publish a performance I had given in 1992 to add to a new website she was creating. In examining my website, she inadvertently found and focused on this very dream, among all the others posted. She writes:

So, your dream, dear friend,...was the one of emptying your locker in the temple. Only a few thoughts--obviously you are "leaving" the Church, being excommunicated and needing to "remove" yourself and belongings from it. Also interesting that the group of men there were seminary (education) not general authorities, which as their titles imply, have represented the "authority" or power, not necessarily the growth or treasures of the mind. And then the fact that you were a promiscuous, attractive woman...the tempting of the base instincts of others' desire to think freely and courageously define their own paths, as they tepidly play I-love-you, I-love-you-not with you--now standing defiantly, hypocritically aloof with, I never knew her!


When I read Saijin's interpretation I experienced an intense "aha!", realizing I finally understood the dream and immediately shared the interpretation with my wife Birgitta. Birgitta then surprised me by saying that she, too, interpreted the dream the same way when she first heard it over a decade earlier. But she thought her interpretation too obvious to mention. What was "obvious" to both of these women was not obvious to me until I had that aha!

Gaining new insight into this pivotal dream after so many years of puzzling over it, gave me new ways to deal with and be released from a life-long preoccupation with Joseph Smith, founder of Mormonism.

PS. (22 Feb 09) Below is a forgotten letter dated December 1964 from Hugh Lynn Cayce that I discovered in my files two or three days ago. Its relevance to this blog post is explained in Comment #1. 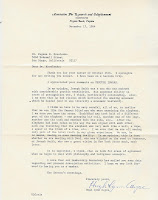