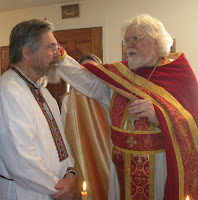 Father Pavel Florensky exemplified an integrity, intellect and courage that also reflected the life of Jesus. And he paid for it with his own life when he was executed by the KGB in 1937. His final work Iconostasis, written in 1922, is a must read for any serious scientific mind. I would not be surprised that Fr. Pavel played a key role in the transformation of Soviet leadership that evolved the concepts of glasnost and perestroika and which led to the near bloodless transformation of the USSR.
Posted by Eugene at 02:00