This morning my young Ukrainian cousin Rodion Gordeev, 22, called me from Ukraine to wish us “Congratulations” for Christmas. He asked if we were still planning on coming next summer to attend his graduation from the University in Kharkov. (Our family has been sponsoring Rodion to this university, where he has been studying for the past five years to become a computer programmer). I told him yes, we were still planning on it, but needed exacts dates and details from him.

As I hung up the phone, not knowing where the funds for traveling to Ukraine would come from, I had an idea that shocked me. That is the purpose of this letter.

Recently I read and was impressed by a book referred to me by Birgitta called Growing in the Prophetic, by Mike Bickle and Michael Sullivant, pastors of the Metro Vineyard Fellowship in Kansas City, Missouri. One of the chapters reminded me of your and my correspondence this past year. It is titled “God Offends the Mind to Reveal the Heart” and Bickle begins with this sentence:

"…Paul’s instructions to bridle people who are operating in the flesh have been interpreted in such a way as to suggest that the Holy Spirit will operate only in ways that conform to our sense of order and respectability. That was not the case in the Old Testament, in the early church or in revivals throughout history…"

Then, here are the two key points that touched me in this chapter:

"Two facts are clear. First, the Holy Spirit does not appear to be overly concerned about our reputations…

A second fact about the Spirit’s dealing with us is this: In contrast to the polite, shy, gentlemanly image we have of Him, He intentionally offends people…."

The first fact reminded me of a puzzling dream I had on Joseph Smith’s birth date in 1964, where I dreamed I was a beautiful woman with a bad reputation. That dream continues to have power in my life. It also reminded me of my January 1978 poem At Penuel. [In three parts attached.]

The second fact reminded me of my poem Verdict, which offended you so much. Although it seemed unimportant to you at the time, I sent a slight revision a week or so later, having changed two words: “Verdict” became “Indictment”, and “false” became “flawed”. There is one additional, recent change: “dust” becomes “judgment”. [Ref: 3 Nephi 22:17b] My personal challenge now seems to learn how to transcend and grow beyond this sense of identification.

It was in the face of this background, these changes and this personal challenge that the distressing idea I had this morning came to mind. Nevertheless, the prompting persists.

I tremble to write these words, but have obeyed the prompting, believing it is in God’s hands. [3 Nephi 21:10c]

Sincerely, in the Father’s Love and Wisdom with a “Merry Christmas” to you and your family,

Russell Pack responded positively. Then, as we prepared to meet to discuss the proposal, something bizarre happened, which muddied the water. One was a letter I wrote to the writer of an 2005 article in a Kiev news source that I subscribe to entitled "Mormon Missionaries in Kyiv". Here is that letter

Your November 9 article “Young Mormons are people on a Kyiv mission” caught my attention. Since I was born and raised a Mormon (Ukraine-born father and Mormon mother), I paid special attention to the article’s accuracy. What you said was true--as far as it went. However, there were notable omissions. For example, among your list of prohibitions required of Mormons, you failed to mention smoking tobacco or taking illicit drugs.

You also failed to mention an aspect of Mormonism, which young missionaries are generally ignorant of, or simply dismiss, since they are bent on converting people to their point of view without much emphasis on developing meaningful, long term Christian relationships. Their attitude is not unlike that of true communist believers during the Soviet era.

When I was in the Soviet-American trade business during the détente years of Brezhnev (1973-74), I was astonished how easy it was for me to do business with Soviets. This was because I knew instinctively how to find and relate to the important decision makers, having been raised and trained in a society with similar attitudes. Often it felt like I was in a Mormon priesthood meeting! In the best sense these attitudes were generally in a spirit of cooperation, rather than cut-throat American style business competition.

But there is a dark side to Mormonism that is not unlike the dark side of Communism. Woe to that member who criticizes the leaders! There is swift discipline waiting, which is not always fair or understanding. I know this by experience.

In September 1973 I was introduced to the poet Evgeny Yevtushenko in the Writer’s Club in Moscow. At the time Yevtushenko was not feeling well, since he had just been severely reprimanded for circulating an open letter complaining of unfair Soviet treatment of Alexandr Solzhenitsyn. I was eventually to understand more clearly how he felt, when many years later I, myself, was excommunicated from the Mormon Church in a classic KGB-like interrogation for challenging the leaders’ paranoid treatment of Mormon intellectuals.

Mormons do not like being compared to Communists. That is the paradox. Mormons cannot see or acknowledge their own dark side any more than the Soviets could during the days before Gorbachev. That is, until glasnost. That is what is missing in the Mormon Church today. Glasnost is greatly discouraged.

My personal hope is that the Ukraine experience of glasnost will set an example for the Mormon Church in Ukraine. The Mormon Church has much to recommend it, but not until it manages to find, acknowledge and tell its accurate history without an apologetic spin...

In my eventual meeting with Pack he presented me a copy of this letter and wondered how I could ever expect support from Church members after having written such a letter. He wrote:

Your recent letter to the editor of a Ukrainian newspaper is a direct attempt to prevent the Church from fulfilling [its] divine mandate [God has repeatedly commanded the Church to take this message to everyone in the world]. What I said to you is that, if you were a member of the Church, I would have to consider excommunicating you; i.e., ending your membership. Whether that actually happened to a person who had done what you have done would depend on their subsequent attitude.

The bizarre part of this exchange was my surprise at his upset attitude. I remember thinking that if I could get before a body of potential supporters, I could make a persuasive case for re-examining our own problematical attitudes. This would only enhance missionary effort in Ukraine, because it would be more authentic and enlightened. The bizarre element from today's perspective was my naivety about this. Not only that, but I was not only surprised that Pack had that letter in his possession, but that I had completely forgotten having sent it to him myself!

My faulty, naive memory had embarrassed me again! Nevertheless, here is my response to his judgments:

You took great exception to my comparison of the Mormon Church to the Communist Party. Indeed—and this point astounded me on reflection—you said that this letter alone would have qualified me for excommunication had I now been a member of the LDS Church! You defended this point strongly.

Can you not see that your denial response, in itself, confirms my observation of the similarities? We are talking about the concept of glasnost then and now and whether you or the LDS leadership understands it.

While I agree that the institutional consequences of a citizen or member complaining about the dark or shadow side of either Soviet or LDS institution is a matter of degree—that is, the Soviets were far more ruthless in their expulsions of Party members or citizens than are the Mormons—the institutional attitudes are similar. In my view, it is this attitude that needs re-examination and transformation these days.

...In any case, God has made it abundantly clear to me that I am simply a fool.

Why else would He send me back to you now, in the face of our most recent conversation and your judgments below, to ask you again to approach your potential sponsors and have them make their own decisions?...

On Christmas Eve, 2006, Rodion calls from Melitopol, Ukraine, to ask if I am coming to his graduation from the Kharkov university next June. I say yes, having no idea where the means will come from. But I am now committed, having promised and wonder who might sponsor a musical mission. I think of approaching Mormon stake president Russell T. Pack.

Rodion is the young cousin whom I met on my first trip to my father's home town of Melitopol in May 1996, a year after my brother found all of Dad's relatives, after 75 years of not knowing! These included first cousin, Evgenia, for whom I was named, now in her 90s. She was the oldest of Dad's three nieces, the daughter of Dad's sister and only sibling, Katya Kovalenko, for whom my daughter was named.

Rodion was 11 at this time, but was eagerly trying to learn English and plan for becoming a computer programmer. It was this intensity and determination that convinced me that we, his newly discovered American family, should help him with his education. So, when he came of college age, we arranged for him to study in the best technical institute of his choice. He is now finishing a Master's Degree in computer programming and speciallizing in web design.
Posted by Eugene at 21:20 No comments:

It was the singing!

I don't know if you will get this music file in a playable form, but I'm gonna try. I think you'll like it! If it comes through and you like it, tell me and I'll send you more of the "Chorovaya Akademia" (Google it for more information!)

This note and the attached music changed my life! 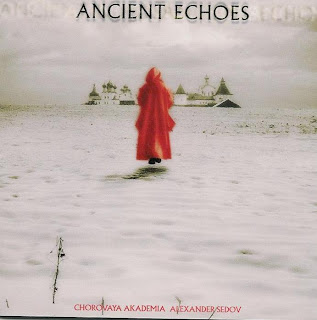 Joseph did not recognize the language or know its origin, "perhaps Romania", he speculated. But as I began to hear the singing, the very first bars went straight into my heart like spiritual food! I implored him to send me everything else he had, which turned out to be 14 tracks, which he sent one by one.

When I saw the title to the 14th and last track, "God is with us", I recalled an event of over 50 years earlier and wondered if this chant was what I had learned as a young soldier at the Army Language School. Could it be the same chant that I had once sung for Russian Orthodox Metropolitan Anastassy? [See blog entries for time period 1953 - 1955]

IT WAS INDEED THE VERY SAME CHANT! And so it launched my search for an Orthodox church.
Posted by Eugene at 09:34 No comments: