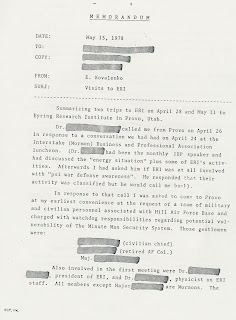 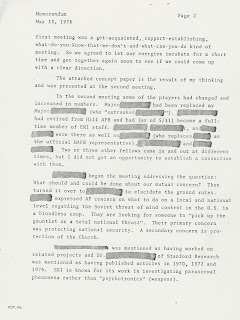 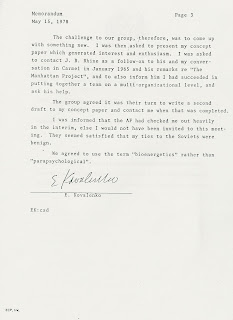 In April 1978, I attended a meeting of the Los Angles Interstake Business and Professional Association. The guest speaker was Dr. Ron Hanson, president of the Eyring Research Institute in Provo, Utah. This was the first I'd heard of ERI and was eager to know what they were all about. I don't remember most of what Hanson spoke about, but when he came to "energetics", I listened more carefully. But did not understand everything he said. So, after his talk I came up to him and asked, "What do you know about psy warfare defense preparedness?" His answer was immediate: "It's classified." I responded, "I think you ought to know about my meetings with J.B. Rhine in 1964-5." He said he'd get back to me.

A day or so later he called from ERI to ask if I could come immediately to Provo to discuss the subject with a group of military and scientific personnel from Hill Air Force Base. Attached is a memo to the management of ECP in El Segundo, California, for which I worked on engineering R&D projects, describing the two initial meetings with ERI. They urged me to respond to ERI's invitation ASAP.

At the first get-acquainted meeting, I was tasked to write a concept paper to present at a second meeting. Below is that concept paper.

Some weeks after presenting this concept paper I was invited to come to ERI to work on a proposal for the USAF at my earliest convenience. I made arrangements to move to Provo by the following December. Upon arriving to work with the ERI staff and Hill AFB personnel, I was informed that the project would concentrate mainly on physical phenomena. This was in a different direction from my own interests. Whereas my personal interest was in psy warfare defense preparedness, the staff at ERI was more interested in PK effects that would compromise the USAF missile defense structure. That was the direction that the formal proposal took and I was powerless to influence that decision.

A formal proposal was developed, which was entitled XXXXXXX. and came within a whisker of being funded. One of the anonymous DOD proposal referees was Jack Houck, then director of special (classified) projects for McDonnell Douglas Aircraft Company in Seal Beach, California. I did not know of Houck at the time, but learned years later (from him) that he had vigorously urged that the proposal be funded. Upon learning of the funding failure, Houck began his own private program to research the subject, using the ERI proposal as an initial guide. His investigations resulted in the now well-known and internationally popular "PK Party". See the latest on this story here.
. 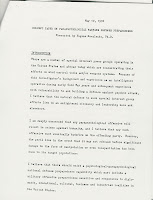