The late Richard T. Forbath was a prominent marketing executive in Los Angeles, a devout Catholic and the leader of the Bel Air Presbyterian Bible study group which I had been attending regularly for about a year, not long after having returned to the Mormon Church the previous year (July 25, 1975). Early in 1976 I was invited to develop a university level course for the University of California at Los Angeles Extension Division in its Center for Religious Experience East and West by its director Dr. Robert Rees, a close friend, who was also managing editor of Dialogue: A Journal of Mormon Thought. The UCLA course was called Creative Dreaming and Spiritual Awakening, which Forbath knew about.


Forbath had expressed strong interest in developing a professional relationship with me during the Bible study experience, which included believers from a spectrum of Christian faiths and denominations, including one Jewish woman. But, he could not understand my having returned to the Mormon Church (which many Christians do not consider is really Christian). In order to deal with his concern he invited me to breakfast at his home and to meet his wife. I brought my then 17-year-old son Jim with me (mentioned in the memo as living on "Aliso Street" in Newport Beach, whereas Forbath lived on "Crystal Street" in the Los Angeles suburb of Brentwood, which is near UCLA). Because of the intensity of Forbath's concern, I decided to meet him with a comprehensive response. Below is that four page memo.

After reading my memo, Forbath never spoke to me again. Obviously it gave him a reality check on his projection of me. I was not the man for his purposes that he thought I was.

At the beginning of the memo there is reference to "the FIVE QUESTIONS and also the Four Metaphors". This was the essence of the take-home final examination for the modestly successful UCLA dream course, which I used as a tool for self-disclosure in the memo. The term "IDT-ABC" refers to "Integrated Dream Team Analog Bio-computer", an experimental byproduct of the course and a concept that I wanted Forbath to understand and utilize. A decade later it morphed into "The CREEI Process" and more recently "Creative Deep Listening" or CDL.**

Among the few people I have shown the Forbath memo to are: 1) a local Orthodox priest, who was initially frightened by it until we discussed it; 2) a retired nuclear physicist with Jewish/Christian background; 3) a Jewish attorney/therapist; 4) a Jewish rabbi, and 5) a Buddhist-oriented psychotherapist, who enjoyed taking the final exam himself and giving useful feedback. Fortunately, I now have deep, personal and working relationships with all of these men.

From today's perspective (August 2011), this memo is personally embarrassing because of its grandiosity. Nevertheless, in sharing it with others and getting their honest feedback, it never fails to give me (and them!) a reality check, as well as an opportunity for me (and them!) to revisit and reinterpret personal spiritual experiences. It still contains ideas, references and insights that are at the center of my sense of purpose and service. Referring to Ken Wilber's famous motto, it is a continuing call to "include and transcend".

Dear Readers, before you read the memo below, consider applying this final examination to yourself. Then take it again afterwards. Notice any differences in your thoughts and feelings before reading the memo and after. It won't be easy!

Part Two: The Four Metaphors
Express your life in terms of two of the following metaphors:
THE REFINER'S FIRE AND ANVIL OF LIFE
1. What metal do you identify with now?
2. How do you see yourself being used?
3. Is your metal appropriate for your task?
4. What metal would you choose if you could begin again?
5. What shape and/or use?
THE PILGRIMAGE
THE GARDEN, STEWARDSHIP AND THE TREE OF LIFE
THE INNER GAME OF FOOTBALL 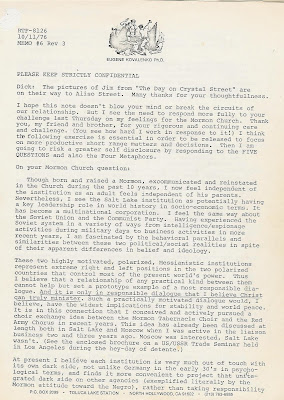 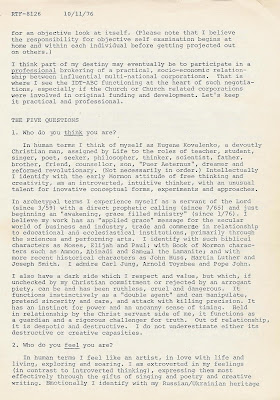 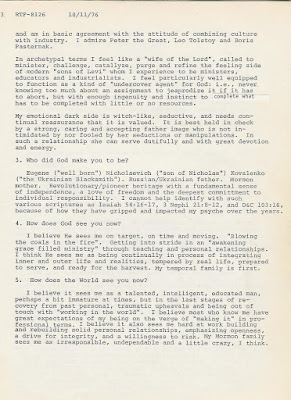 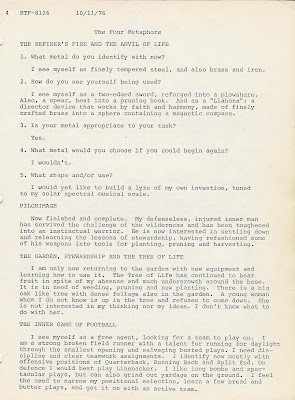