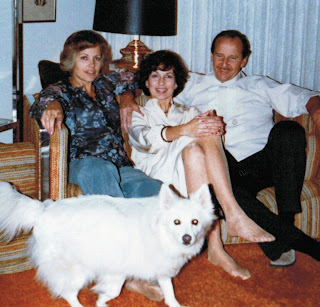 I met Birgitta Lilly Stavenow in September 1976 at a concert in Pasadena where she was performing on the night before returning to Sweden. A mutual friend had wanted us to meet and when I arrived late to the Lake Avenue Congregational Church and entered the door as quietly as I could while she was performing, her glorious voice had filled the auditorium. I felt I had heard her soul.

Birgitta, a professional singer in Sweden, had been on a 6-months tour to California, which was the place she, her parents and four siblings had emigrated to in 1950, when she was 15. She left California in her early 20s to return to her homeland and later graduated from the State Opera School.

We began a correspondence that last night of her tour, which continued over a period of 17 years even though there was a hiatus of 12 years in between. Neither of us had ever been so met in writing to another.

The next year (1977) I had a first dream of her and felt that she would one day be important in my life. We were married in Malibu, California, in October 1993.
Posted by Eugene at 20:00 No comments:

In January 1976, I awoke from a dream where a clear male voice issued a command:

"It is time to wake up and begin a grace-filled ministry!

At the time I had just been hired by "Brother" Taylor, a fiery black Pentecostal minister in South-Central Los Alamos (Watts) to sing spirituals on Sunday mornings for his weekly radio broadcast.  Brother thought the dream was meant for him and his Greater Grace Memorial Church of God in Christ. It was a thrilling, uplifting, soul-expanding several month experience.
Posted by Eugene at 08:09 No comments: