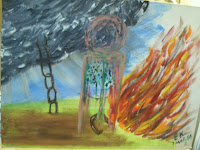 After deciding to enter Jungian analysis with Psychiatrist Robert M. Stein, thanks to Lawrene's help, I had the following dream that same night:

Main Scene:
Stormy, wind swept desert. A great chain in the distance descends from heavy black clouds into the earth in three or four huge links. Closer by a small boy holds on to a rope that goes into the clouds as if flying a big kite. He doesn't know what he has got hold of and his mother doesn't believe him. On the desert landscape there is a complex of two white mobile homes at right angles to each other.
CREEI Score: +??--?//+++/++?: Anticipatory

(Note: Jungian psychiatrist Robert M. Stein's first priority analytical challenge: Help Eugene to protect the boy within so that he can mature, honor and comprehend the mystery he has got hold of. )

First Scene Change: In one of the mobile homes I am with two young women sisters, describing to them the numinous phenomena outside. We go into a public restroom while one or both go into stalls as I continue talking. They seem fascinated with what I'm saying, having not noticed that the door says "Men". Both find out in time to leave after doing their business and before being discovered.
CREEI Score: +++++?//+++/+++: Motivational

Second Scene Change: With Lawrene in a public complex of mobile homes, joined into an "L" looking out over a barren region, fairly flat with yellow-red earth, which is probably dusty when dry. The inside walls of the "L" are all windows. I tell her about the phenomena and she humors me good naturedly. I invite her to look and to see both the distant chain and the nearby rope. She does so and acknowledges what she sees and remains good natured. It doesn't seem important to her and doesn't affect our relationship. She offers to go to bed with me. We walk down the public corridor, wrapped in white towels, arms around each other and go into her room. I remark, "You're the greatest human being I know." She is glad to hear it and smiles. I mean it, but wonder if I've ever felt this way towards anyone else.
CREEI Score: ++++++//+++/+++: Transformative

Note: this is about the time Michael is conceived.
Posted by Eugene at 03:02