Learning about beloving from Howard

Since our initial correspondence in summer 1959, Howard had become the image of wise man and mentor. Learning in early January 1965 about his 1963 Mormon Church excommunication was surprising, shocking and puzzling. But now, during my own unsettling experience in failing to win Mormon Church hierarchical support for the project with Professor Rhine at Duke University, I was getting a reality check about how the Mormon ecclesiastical enterprise functioned--or didn't.

In the meantime, Howard, now in a needy spiritual place, was confiding and relying on me and I was eager to be of service and support. He had become like a father to me and I naively speculated on introducing him to my newly widowed mother! In this process his interest in me evoked emotions in me that I'd never before felt for any man, except for my own late father during his last month on earth (April-May 1964).

Below is an example of a "beloving" letter from Howard that had enormous influence on me, especially his reference to "Nathan" in the fantasy second paragraph. It would become the inspiration to my poem Nathan's Cry, written to President David O. McKay six months later. 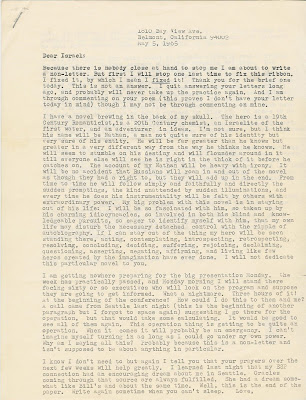