We made it legal on the earliest date possible: April 6, 1967. This was so Michael could now be considered legitimate--as if that mattered these days. It didn't matter to Lawrene, but it certainly did to the Mormon Church. Mormons will recognize April 6, since that is the date Joseph Smith announced that Jesus was really born--not December 25, as is normally celebrated. No matter how Joseph Smith determined this date, it is why the Mormon Church conducts its annual general conferences on the April weekend as close to April 6 as possible.

This brings to mind my dream of April 2, 1966, which was on the date I was excommunicated from the Mormon Church for not being legally married. In the dream I am being asked "How was Mazatlan?" This was a clear reference to Lawrene's and my intent to legalize our marriage earlier in Mexico, but which had been frustrated by a minor, but effective bureaucratic glitch. 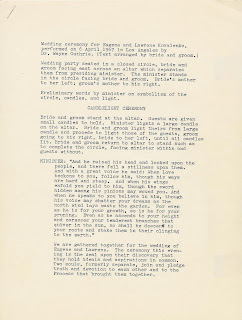 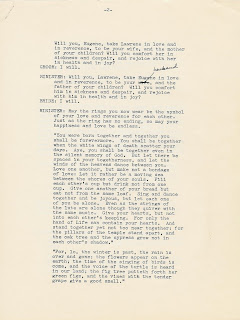 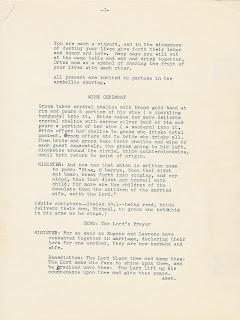 On this date, April 6, 1967, Lawrene and I were married by Wayne Guthrie and Bella Karrish of the Fellowship of Universal Guidance. We designed our own ceremony, which Wayne read. In attendance were our two mothers as witnesses and baby Michael, who screamed bloody murder! He put up such a fuss that my mother had to take him out of the room so that the ceremony could proceed.