Posted: 23 April 2010
Updated:
It was a strange time with a surprisingly large congregation, compared to last week. All undoubtedly came to meet the new dean and get a preview of how the parish will fare after Fr. John's departure. Dean Fr. Seraphim Hish (sp?) celebrated the Liturgy and met with the Parish Council following the fellowshipping period. Although I had resigned my council post shortly after Fr. John's announcement, as did Barbara weeks before that, Dimitri, as council president, invited us both to attend.
Of primary importance, we got a hint of the care and deliberation the Diocese leadership is giving our little mission.
The Liturgical singing was again troubling and I became quiet midway for the remainder of the service. Often the Dean would speak or sing so softly that we could not hear him. There was clearly a message in this.
We learned that Fr. Seraphim is a convert (we already knew this), but what we did not know was that he is married with a large young family: five children aged ten, eight, six, four and two. Wow! We also learned that he has Masters Degree in physics, which bodes well for our particular parish. Furthermore, he has been given primary responsibility for our mission until a new priest is found and the mission becomes a stable parish.
I was pleased by his questions and suggestions and felt that the parish is in good, firm hands. Whether we will continue to meet in the present building was not clear to me, but it seems that we have a solid enough membership that the community will continue, wherever we meet. George Peters and are the new council members, along with Dimitri Medrick and Elizabeth Bezzerides.
Posted by Eugene at 20:18 No comments: 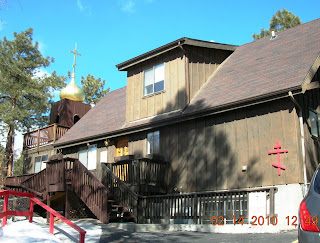 Birgitta and I came together to hear and experience Fr. John's last sermon as the priest of St. Dimitri's. I had agreed to sing the Epistle at his request. (It turned out that the scripture was from the book of Acts, rather than from a letter by St. Paul, which made a difference for me). I had intended to be silent during the Liturgy as I had previously expressed via email to Fr. John, unless prompted otherwise.

The prompting came in a surprise gesture from Elizabeth. During the service I sat down most of the time rather than stand because of an ailing knee, when it came to my turn to sing the "Epistle". So, as I was holding the binder of music unsteadily in my hands, rather than having it rest on the music stand as normal, Elizabeth quietly brought the music stand over to where I sat and lowered it to my eye level. This immediately reduced my discomfort and fumbling. Then, after I sang the "Epistle" in comfort and she began singing the regular Liturgical music, her voice was surprisingly and unusually soft and gentle and I could easily hear Fr. John's sweet tenor coming from behind the Iconostasis--just the two of them singing. As their duet continued, soon I could not stay silent--I mean I could not NOT sing and began adding my bass voice to what was becoming a much needed harmony. Birgitta then joined in with her marvelous alto voice and the beauty of quartet blending of our hearts and voices again filled the temple, a sound we had not heard since Maestro Drillock's visit to us last September. It was a gift of the Spirit and we all rejoiced in beautiful Orthodox Liturgical music once again.

What will now happen after Fr. John's departure is anybody's guess. I understand that Fr. Seraphim, the dean from the Diocese of the South based in Dallas, will be serving and celebrating the Liturgy. But I do not know or how to relate to him. I understand further that he is young and ambitious and originally from Los Alamos with a degree in physics, which raises caution flags for me. How all this will play out is a mystery in my mind and heart and I can only hope the Spirit will again be present with new surprises.
Posted by Eugene at 12:56 No comments:


As we approach "Bright Saturday" (the Saturday after Pascha or Easter, which includes Sunday morning), St. Dimitri's priest Fr. John Hennies and I had a few final email exchanges relative to his final Sunday service before retiring:

When you are up to it, let’s get together and discuss M. Scott Peck’s description of “Militant Ignorance” as applied to St. Dimitri’s and the demise of beautiful liturgical singing.


Dear Zhenya - CHRIST IS RISEN! I don't think there is something that can be called the "demise of beautiful liturgical singing", but I think beautiful liturgical singing has been raped!!!! Once someone has been raped they do not experience a "demise", but they must be coaxed back into recognition of the fact that God has created them to be beautiful, and violation does not mean they have lost all beauty. It means they have been raped! So I hold out hope for St Dimitri's and the return of beautiful singing.

What I need most from you at the moment is to have you chant the Epistle on my last Sunday, which is this Sunday, and that you give me enough space to move into my new life. After this Sunday I need not to think about St Dimitri so much as I need to ruminate on my new life and my new freedom. so please give me space to do that. When we next meet it will be a joyful time to return to the free-flowing thoughts which we have so often shared.

IN THE RISEN CHRIST, FR JOHN+

P.S. Arrogance will not diminish my hold on hope for the future

INDEED HE HAS RISEN!!

I will be happy to chant the Epistle on your last Sunday at St Dimitri’s, but I doubt I’ll be able to sing the Liturgy. I intend to be silent unless the Spirit prompts otherwise. You will know if and when that happens.

Take all the space you need before our next meeting or communication. As you observed when we met at the café last Friday, we have come to a fork in the road of our common journey and are now moving in different directions. I feel my life’s work is only just beginning its final, integrating phase.


DEAR FRIEND,ZHENYA - THANK YOU FOR UNDERSTANDING MY CURRENT PLACE. I AM NOT "SHUTTING DOWN", I AM JUST LOOKING FOR THE NEW DIRECTION MY LIFE WILL TAKE. OOPS! I FORGOT AND LEFT CAPS ON, SO I AM NOT SHOUTING, JUST NEGLIGENT. LOVE IN CHRIST FR JOHN H.+


And, of course, you will pay close attention to your dreams for clues to that new direction, yes?