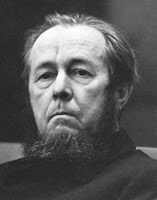 Two books by two great Russian writers came to my attention this past week. The first book was Alexander Solzhenitsyn's Warning to the West, published in 1975. One of his major warnings was of the then policy of detente, which he felt was a cynical Communist device to exploit western vulnerabilities. Yet it was because of detente that made it possible for me to finally get to Russia.

Only after reading further in this first book did I realize it was published at the time I had returned to the Mormon Church after a 10 year exile. This was important to me because I had first become aware of Solzhenitsyn in September 1973, just two years earlier, during that first trip to Moscow. While there I was a dinner guest of Soviet writer Nikolai Bogdanov at the Writer's Club in Moscow. He noticed fellow writer, the Russian Poet Laureate Yevgeny Yevtushenko sitting alone at a table nearby and introduced us. Yevtushenko was holding his head in great pain, which, it turns out, was the result of just having been severely censured by Brezhnev and the Communist Central Committee for circulating an open letter complaining about the government's harassment of Solzhenitsyn. Three months later Solzhenitsyn was sent into exile and for the next 20 years lived in Vermont where he was largely ignored. Because he enjoyed far too much international popularity by late 1973 in his own country (having won the Nobel prize in 1970) the authorities would not dare send him to the gulags again.

The second book came to my attention as a major image in a recent dream. It was Pasternak's Doctor Zhivago. Here is the dream:

Am about to leave the office of a university administrator after coming to retrieve something I'd left long ago. The man sees a paperback copy (cover missing with rubber bands around it to keep the pages together) of an English translation of Doctor Zhivago in my hands and says "I see you have that story. Isn't it pathetic?"

Surprised by his remark I respond immediately, "On the contrary, it's one of the greatest things written."

The man stiffens, looks down his nose at me and says, "Don't try to get chummy with me!"

I reply, "That's of no interest to me, but being genuine is. And this book--especially the poetry--is as genuine as anything I can imagine."

In an earlier scene in this same dream and at the same location, I am discussing Russian literature with Barbara (ex-wife).

This dream gave me a new sense of clarity at this point in my Orthodox Odyssey and excited me again about my favorite book. It also inspired me to begin to read Pasternak's poetry in the original Russian.

Both Solzhenitsyn and Pasternak won Nobel prizes for literature, which came from the crucible of their Soviet experience. Both writers shook the Communist system to its foundation because of their courage and artistic gifts. In doing so they expressed themselves in entirely different ways: Solzhenitsyn as an unyielding, judgmental and condemning Old Testament-like prophet; Pasternak with a love story about life and the human spirit.

Both were treated badly by a system that feared openness and expressions of truth as only art can do.
Posted by Eugene at 08:49 2 comments:

Truth by Reason and by Revelation

23 April 2009
Forty four years ago today, I received a book that changed my life and that of my family. It was sent to where I worked as a research scientist at General Atomic in La Jolla, California, and its repercussions are still affecting me and family. The book was called Truth by Reason and by Revelation, written by Dr. Frank B. Salisbury, a respected professor of plant physiology at Colorado State University. Frank was the nephew of my erstwhile mentor Howard, who had sent it for my review from the perspective as a fellow believing Mormon scientist.

I found the book boring at the beginning--just another rationalization by a Mormon scientist trying to reconcile his religious upbringing with his scientific training--or so I thought. That is, until I got to the chapter on Flying Saucers. I was amazed to learn that this subject, which before reading Salisbury's book I had considered to be silly and due to mass hysteria, is not new. It even has Old Testament references. [See blog posts for Flying Saucers, The Experiment and The Sighting in archive file for March 2007.]
Posted by Eugene at 05:26 2 comments: 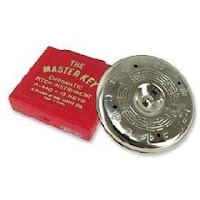 I'm trying to find the right pitch on my pitch pipe to sound for members of the parish council. We are in an open, barren area with a paved street, concrete curb, gutter and sidewalk. A long narrow dirt-colored carpet has been rolled out on the sidewalk and then moved aside away from the street. There is no vegetation of any kind in the area; only brown barren dirt. One or two long folding tables have been placed on the ground parallel to the sidewalk.

Four visitors have come into the area to inspect what is on the tables. One is a huge, silent mountain of a man in red shirt who faces me while tenderly holding the hand of a tiny girl, perhaps 2 or 3 years old, on his left. They are accompanied by a small, quiet old woman who stands next to the little girl further to their left. A middle-aged reclusive man sits on a chair near the tables on the side furtherest from the sidewalk with his back to me and the others. He turns his head to his left when he senses me looking at him and says quietly: "I feel cozy here." Although council members feel present, I don't see them.

This is clearly a depiction of my personal inner landscape. How it describes my outer reality remains to be seen. In reflecting on this dream scene in terms of my role as a member of the newly-established parish council, I feel compassion for these four dream visitors, but have no idea how to relate to them.

As I continued to wonder about this, it occurred to me that, once the hymn is pitched "right" and sung with beauty, gentleness and inspiration, the music will hopefully envelope and bring these and other visitors into our spiritual community. I shared this dream with Fr. John the next day in anticipation of our final Paschal [Orthodox Easter] celebration. He empathized with my dilemma.
Posted by Eugene at 07:57 5 comments:

At Lake Abiquiu, New Mexico, on the way to our first council meeting at a near by retreat at St. Michael's Skete. Fr. John is on the left of the upper photo, "Zhenya Arseny" (Eugene) is on the left in the lower photo as we are with other council members Dimitri, Elizabeth (in red) and Barbara. (Zhenya took one photo and Fr. John took the other.) 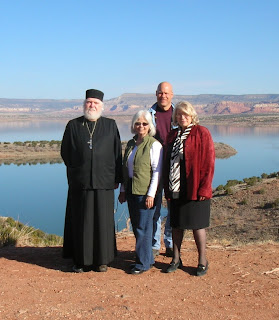 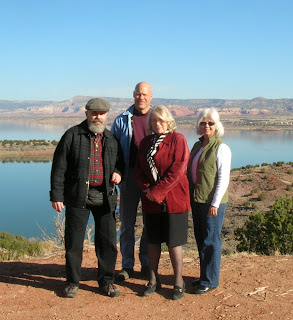 After that retreat I became aware of a new OCA podcast series. In the first podcast on April 9 Metropolitan Jonah was interviewed by Fr. Andrew Jarmus. In response to a question toward the end of the podcast Met. Jonah was asked what he sees for the traditional Church in the Twenty First Century, and he was quick to say that he sees it emphasizing love, concilliarity and consensus rather than hierarchy and power. At the heart of such a church organization is a corresponding new emphasis on parish community and communication. This means to me a new emphasis on horizontal rather than vertical relationships.

It is in this attitude that our tiny new parish tried to create its first parish council. I had the privilege of being appointed by Fr. John to the music and outreach committees. Barbara was appointed to the finance committee and Dimitri was put in charge of the church building facilities. Elizabeth, of course, being the founding member of the parish was asked to be resource to all the rest of us. Fr. John would be the final coordinator and liaison with the diocese.

A few days later I had a dream, which I believe clearly reflects my personal experience of our parish to that date. It appears to be a heads-up on what we face as a council and I call the dream "Trying to find the right pitch."</span> See the next post here.