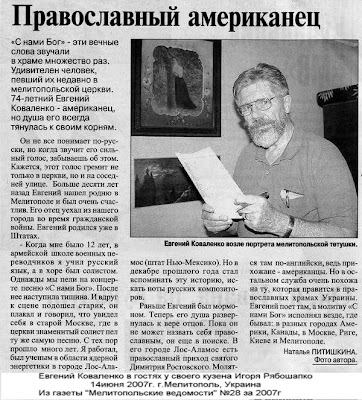 Having returned last night from Ukraine, there is much to report. That will take time. In the interim I have two comments:

1) In a discussion of my "Orthodox Odyssey" with Russian Orthodox relatives, cousin Olga observed that my sub-title [which had been "Remembering my father's lost tradition"] might use the word "forgotten" instead of "lost".

2) In a different discussion with another side of the family who are both Orthodox and evangelical, I sat quietly for some time while mother (Zhanna) and daughter (Natasha) engaged in a heated debate about the differences between Orthodoxy and evangelical Christianity. Zhanna, who can often come on strong, could not understand why her daughter had become Orthodox. Both parents seemed of the opinion that Natasha was being contrary. I had observed earlier that Natasha is generally quiet, shy and non-combative.

Noticing my long silence, cousin Igor (Natasha's father) turned to me and asked what I was really thinking. "Zhenya", he said looking at me intently, "what are you thinking? Tell us the truth!" Deciding to be candid, I said, "I believe Natasha is an intelligent woman with her own reasons for choosing to be Orthodox. I honor her choices." At that moment I saw tears of gratitude come into Natasha's eyes, although she remained silent. I think she felt heard.

Thanks to Zhanna and Igor, I had opportunity to sing "God with us" in their Grace Melitopol Christian Church, which has American Campbellite roots.

Later, thanks to Natasha, I had opportunity to sing "God with us" in two different Orthodox Church settings. The last was in the largest Orthodox Church in Melitopol, the very church in which my father was baptized in 1903. It had recently been restored since the fall of the USSR.
Posted by Eugene at 02:00 1 comment: