On June 26, 2008, in reflecting on pivotal life events, I recalled my long ago baptism by John Howard in the icy Colorado River. I telephoned John at his home in Portland to ask if he still had a photo from that trip and if he would send it for my blog. We reminisced about those eventful days and our many conversations about "the important questions". Yes, he said he had the photo and would send it. 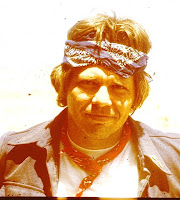 That baptism is the event that Orthodoxy accepts. It happened in mid May 1975 at my request during a 12-day river raft float through the bowels of the Grand Canyon. Earlier that spring John R. Howard, then president of Lewis & Clark College, invited me to share this adventure with him, his wife Ruth and a dozen or so college-related friends. At one particularly inspired moment during those days of earnest conversation on the river (when we weren't in the rapids!) and awesome nights under the stars on the river bank in the vast quiet of the canyon, the Presence came into and over me to prompt my request. John was surprised and reluctant at first, but seeing my earnestness he joyfully accepted. It is an event I will never forget.

This event is the one that Orthodoxy would honor 33 years later when I applied for membership in the Orthodox Church in America on September 19, 2008. A legalistic Mormon baptism later that same year (by 17-year-old son Nick on July 25, 1975) didn't count with them.

When first attending St. Dimitri parish to enjoy singing the Divine Liturgy in 2007, I joined the small group fellowship discussion afterwards in the priest's office. At one point I lamented to the priest, "How many times must one be baptized?!"

"Only once!", Fr. John Hennies declared. And with that, the memory of this Grand Canyon moment flooded my mind. Ironically, it had occurred between two encounters with Mormon bishops that same year. Allow me to explain:

After the collapse of my Northwest-Soviet Liaison Corporation in June the previous year in Moscow (1974), I felt lost. John Howard had helped me launch that exciting Moscow enterprise and served as its board chairman. Having what appeared to be a promising new career again suddenly cut short, I was disoriented and confused. I had believed that the enterprise had been divinely directed, but now I was not so sure. I supposed John's invitation to join the river expedition was a kind of consolation.

It turned out to be just that.

In light of my disappointment and disorientation, I had felt the need to be re-baptized. John does not know this even today, but before his invitation for the trip, I had felt prompted to return to the Mormon Church. Because of my business experience with Soviets in Moscow and becoming aware of surprising similarities between Soviet and Mormon attitudes, organization and behavior (they even referred to their high level leaders as "the Brethren"), I began wondering if it had been my pride that had originally precipitated my excommunication years before. So, I decided to move toward reconciliation with the Mormon system.

In those days, for an excommunicated Mormon to return to Church membership, he was obliged to return through the same ecclesiastic door he had exited. For me that door was the Laguna Beach Ward. I made an appointment with the Laguna Ward bishop, who was then Stanley Kimball. Interestingly, Spencer W. Kimball was Church president at the time. (I do not know if they are related.) Without revealing the purpose of my meeting other than to get acquainted, I had formed a critical test question for him in my mind. I asked, "Bishop, if President Kimball were to order you to shoot me, would you do it?"

"Without question!" was his immediate response.

"This is not the time", I thought to myself, and ended the meeting.

It was shortly after this that John Howard invited me to join the river adventure.

In June, following the Grand Canyon trip, I still felt prompted to return to the Mormon Church because of unfinished business and was surprised to learn that the Laguna Beach Ward bishopric had just been reorganized. The new bishop was Rondel Hanson. I made another appointment and came with the same question.

"Absolutely not!" Hanson declared, aghast that I should even ask such a question. "First, he would never say such a thing. Second it isn't right. Third, I wouldn't do it."

"It's time!", I thought and applied for readmission to Mormon Church membership. A delighted Bishop Hanson made immediate arrangements with Stake President Ferren L. Christensen to present my petition before the stake high council.

That is another story.


A few days ago I asked the local Mormon stake president Russell T. Pack to review this story, because it was he who had put a fine point on the issue of baptism in an earlier statement where he had said, "The issue is not history. The issue is who has authority to baptize and have it recognized by God." Now he wrote:


“You already knew that your baptism in the Colorado River was null and void. That is why you were rebaptized into the Church of Jesus Christ of Latter-day Saints after that.”

To which I replied,


On the contrary, that is an experience I treasure and can never forget. What I did know then, however, was that there was unfinished business between me and “The Church of Jesus Christ of Latter-day Saints.” The nature of that unfinished business only became clear to me 17 years later during Ventura Stake President Richard S. Bryce’s late night secret call to the stake Relief Society president on March 17, 1992 (just after my last public singing concert for the Church, which the stake RS president had asked me to present to her sisters) and his subsequent 6-hour KGB-like interrogation of me on June 6, 1992 (which is now in the public record). This unfinished business has become even clearer to me during your and my recent communications...


June 4, 2008 email from John R. Howard:
To whom it may concern:
I write re: Gene Kovalenko............a friend these past 35 years, a gifted singer, and a deeply committed seeker after the truths that define and guide the human condition.
In 1975, in the company of 23 other friends, Gene floated the Colorado River with my wife, Ruth, and me.
In the enchanted confines of the Grand Canyon, it was my pleasure to baptise Gene.
Although not a minister, I was at the time deeply involved with the Presbyterian Church, as an elder in my own church and as a delegate to the Presbyterian General Assembly.
While I make no claims for my own Christianity, I feel confident now - as I did then - that Gene is a devout Christian.