This five minute presentation accelerated everything.

In Spring 1961 I was now a first year graduate student at the University of Utah in Salt Lake City, having won a three-year NDEA,Title IV research fellowship while at UC Berkeley.

In that spring I represented my Mormon married student ward at the University of Utah Stake Speech Festival on the theme How can we build the moral strength of our nation? [See text below.]

After all the presentations from other student ward representatives had been made, Oscar McConkie, Jr., the LDS stake leader who conceived the festival theme [and whose law firm, Kirton-McConkie, would eventually become general legal counsel for the international corporate LDS Church] excitedly demanded to know what I was referring to in the last part of my speech. Flattered by his attention and because (in those days) Mormon priesthood authority trumped my U.S. Army requirement of silence, I improperly disclosed a reference to my Berlin military service. [Years later (fall 1965) this disclosure would have disastrous consequences for me and my family.]

Two immediate positive consequences of the speech were: 1) I was called to serve an extra-curricular stake mission and 2) I joined a group of five men to discuss practical ways to implement the theme of the speech.

Then, two years later the stake mission would bring my father and me together in a life-changing way before his death. Furthermore, Eugene England, one of the men in our dialogue group, went on to found the well-regarded Dialogue: A Journal of Mormon Thought at Stanford University in 1966. This journal has since parented several other independent Mormon-based organizations and publications such as the Sunstone Foundation, The Association of Mormon Letters, Journal of Mormon History and the Mormon Alliance.

How Can We Build The Moral Strength Of Our Nation?

Speech given at Stake Speech Festival, 1961.

You've all probably heard the popular song that goes: “Give me some men who are stouthearted men, who will fight for the right they adore.” Remember that song? Have you ever listened to it sung by a favorite singer with particularly great conviction and, at the same time, sensed an inner patriotic resonance as he sang? If you've felt such a feeling, perhaps you've wondered what it was or where it came from. Well, I think the topic this evening has something to say about this kind of feeling.

Moral strength, more than chastity, more than virtue, innocence and clean living, is, I think, made of the stuff that gives the patriot his drive to serve. I dare say that if our nation were a nation of patriots, we would have little need to be as concerned as we justifiably are about the lack of moral strength or how to build it. If this is so, and I believe it is, perhaps we might restate our abstract aim of building moral strength in terms of a more concrete concept: that of “patriotism.”

Who, then, is the “patriot”? What is he made of? How did he get that way? In my opinion a patriot is he who, first of all, is devoted to his country. But he is devoted with reason. He is devoted because he understands what his country is and what she is not. He is devoted because he understands why and how she was conceived, what she has become, and what she is capable of becoming. But, more than just understanding, he BELIEVES in her. And he makes her aspirations his own. He believes in her despite her weaknesses, not because he is blind to them, but because his understanding tells him that man-made organizations have never been perfect and in all probability never will be.

The true patriot does not ignore these weaknesses. On the contrary, he understands them and then calmly, deliberately, sets out to lend his strength to their correction, vously when necessary. He is awake, willing, and prepared to serve. But most of all, he possesses two fundamental traits: UNDERSTANDING and CONVICTION.

So much then for a very brief description of what in my opinion a patriot is. As for how he got that way, or how his understanding and conviction may be developed, let me suggest that the major part of the answer lies with two more significant words: TRUTH and RESPONSIBILITY.

To examine the converse, surely he cannot develop the requisite UNDERSTANDING on which to base unshakable CONVICTION without first having the TRUTH and then the opportunity to apply it: RESPONSIBILITY.

Unfortunately, behind such a simple sounding solution lie hidden, deceptive complexities. For example, you and I both know that it is difficult these days to know how to tell the truth from misleading propaganda, whether it is commercial or official. Furthermore, I cannot help but feel as the result of my own experiences, and those of many of my closest friends, that there exists an ill-advised attitude towards us, the youth of the country, of OVER-PROTECTION from ideas not in harmony with what some people consider proper. In other words, somehow somebody is afraid to tell us the straight scoop--the unvarnished TRUTH--out of fear that we, the youth, would not know how to handle it.

This is indeed a paradox, because moral strength, or in our consideration, patriotism, which is so desired by responsible people in the government, cannot come or develop properly without a greater effort by the government to speak plainly in matters of propaganda and policy.

(Incidentally, I might note that President Kennedy, himself, in his unprecedented live news conferences, does seem to be doing this very thing: that is, speaking more plainly, which is extremely encouraging!)

As I see it, the only result which can come from unbalanced or one-sided information are corresponding unbalanced and faulty decisions, which faulty decisions, when confronted by further and sometimes contradictory facts and ideas, wither and crumble from lack of prior consideration or depth of understanding.

The remedy is certainly not increased protection and censure, but rather more opportunity to make proper and sound decisions on the basis of more responsible information. On the basis of the TRUTH!

Here then is the heart of what I have been trying to say from the beginning. In my opinion, a partial solution to our country’s lack of moral strength or patriotism is for us, the youth and potential leaders of our country, to be intensely challenged by the new and youthful administration, with greater latitude to think and to respond--assuming, of course, that we have nothing to fear from knowing the truth.

Give to us, AND EXPECT FROM US, greater responsibility in governmental affairs, that our understandings might become more sound, that we might devote ourselves more responsibly and proudly to REALITY, rather than to false images.

I submit that this thesis is NOT as naive as it might at first seem. For I HAVE SEEN WITH MY OWN EYES--I KNOW FROM MY OWN KNOWLEDGE--REMARKABLE EXAMPLES OF THE RESPONSES OF YOUNG MEN CALLED BY THIS COUNTRY TO SERVE AS A LAST RESORT, AND GIVEN WHAT AT FIRST SEEMED IMPOSSIBLE RESPONSIBILITY!

I am convinced that TRUTH and RESPONSIBILITY will, indeed, give us the patriot’s attributes of UNDERSTANDING and CONVICTION.

Then, having armed ourselves with INSIGHT, as well as COURAGE and IMAGINATION:
GIVE US MORE YOUTH (to paraphrase the song I referred to in the beginning) WHO ARE STOUTHEARTED YOUTH, AND WE’LL SOON GIVE YOU TEN THOUSAND MORE!

Also, the U of Utah Alumni Magazine published a related article called Man with an Idea. 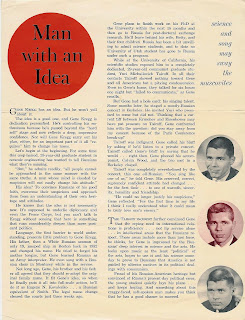